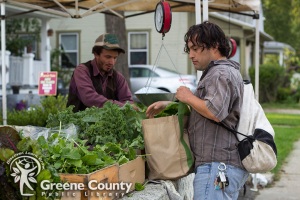 As we finish out 2014 and welcome in the new year, La Pampa Grill would like to say thank you for the continued support during our third year in business. 2014 was a year of transition and new partnerships for La Pampa, in which we were able to solidify the foundation of the business moving forward. However, it began with a rocky start primarily due to the bureaucracy that comes with the annual licensing of a mobile food vendor.

After we put forth much energy to be part of the efforts of Synergy Incubators’ innovative business plan for a food business incubator in downtown Dayton in 2013, we were disappointed to see these efforts ended without having been brought to their full potential in only one year of operation. Thus, at year’s end in 2013, La Pampa was in search of a new home.

In the early months of 2014, a new local potential partner emerged: Antioch College. Based right here in Yellow Springs, Antioch College has revived itself with a mix of enduring grit, exceptional talent, and ceaseless efforts by many near and far. When approached by La Pampa Grill to partner as our “commissary kitchen” the college expressed interest and good will. After months of working through the details of a contract, by June La Pampa had a new home base. We are thrilled at this partnership moving forward and very grateful for the insight and forward thinking of Antioch College.

In the midst of this transition, La Pampa was still able to host some wonderful spring ev

ents with temporary licenses. In April, La Pampa Grill and Emporium Wines in downtown Yellow Springs held the first Chefs Collaborative Earth Dinner. A local, seasonal menu prepared by La Pampa was paired with a selection of featured wines from Ohio and Argentina. After the “tabla de quesos,” a selection of local cheeses from Blue Jacket Dairy, we served local, grass-fed beef grilled right outside in a traditional wood-fired Argentine style by the “parrillero” Mariano. Seasonal greens from Flying Mouse Farms and Patchwork Gardens accompanied the steak. Afterwards each enjoyed an espresso with petits fours made from scratch.

In addition, La Pampa grilled for a series of home games of the Yellow Springs High School baseball team at Gaunt Park, and kicked off another round of its seasonal outdoor grilling parties at Yellow Springs Country Bed and Breakfast and Peifer Orchards. We also returned to the annual Yellow Springs Street Fair in June and October, as well as the Clifton Gorge Music and Arts Festival in August. At Troy’s Festival of Nations, La Pampa Grill was awarded “Best Food” by the festival committee!

Unfortunately, despite these events La Pampa was not back on the street grilling during the summer, as we were tied up with a lengthy bureaucracy to renew our food vendor license in Greene County. Complying with a new round of regulations and a long wait prior to our inspection, we were finally licensed in the end of September—with summer ended and a brief fall season ahead of us.

It was only during the months of October, November and December that we were able to return to Peifer Orchards with our Argentine classic sub sandwich, the chori-pan, and a new seasonal special of grilled, stuffed acorn squash. We also were back at the Yellow Springs Brewery warming the chilly evenings with the wood-fired grill and portable bonfire.

Finally, our tradition of grilling Thanksgiving turkeys was another successful year. In fact, their popularity has spilled over to the Christmas holidays. La Pampa grilled individual turkeys for families at both holidays, bringing locally raised turkeys grilled for the hour of serving the family meal.

As we welcome in 2015, we wish to extend our heartfelt thanks to everyone over this past year, and particularly for your patience! Despite the late start in 2014, we are delighted to have strengthened our partnerships and continue to offer the finest seasonal products raised and grown on local farms—our real heroes! Thank you to Anderson Farm, Apple Oak Meadows, Flying Mouse Farm, Morning Sun Farm, Smaller Footprint Farm, Palara Farm, Patchwork Gardens, Peifer Orchards and all our butcher friends!